Christopher Michie is an award-winning flautist currently studying flute under Gitte Marcusson, Sue Thomas, and piccolo with Kathleen Stevenson at the Royal College of Music in London. Christopher recently graduated with a First Class Honours and the Principals Prize for All Round Excellence from the Royal Conservatoire of Scotland. He has also enjoyed holding the position of Principal Flute with the NYOS Symphony Orchestra participating in tours around the UK. In 2019, Christopher won the prestigious Governor’s Solo Woodwind Recital Prize at the RCS; he has also performed alongside the Scottish Chamber Orchestra Wind Soloists. Christopher is an awardee of various scholarships including The John Lewis Partnership Scholarship, Help Musicians UK, Countess of Munster, Drake Calleja Trust and the Dewar Art Awards.  Christopher enjoys a diverse musical career in various settings from orchestral to solo concert engagements. He has been a Concerto Semi-Finalist at the RCM in 2020 and Concerto Finalist at the RCS in 2019. As well as performance, Christopher enjoys teaching and pedagogy and regularly tutors students of all ages. He is an advocate and ambassador for fair access in the arts – as a former Transitions student at the RCS, and a mentor on the RCM Sparks programme, he firmly believes that music should be open to everyone.

This interview was originally conducted in Spring 2021 for my original Masters project.  Chris currently plays on an Altus 1607 flute and a Yamaha YPC62R. I loved getting to speak to Chris for numerous reasons, as his enthusiasm and love for his instruments shines through so brightly, and it was  especially exciting to chat to someone who is as obsessed with naming their possessions as I am!

This interview took place in March 2021. 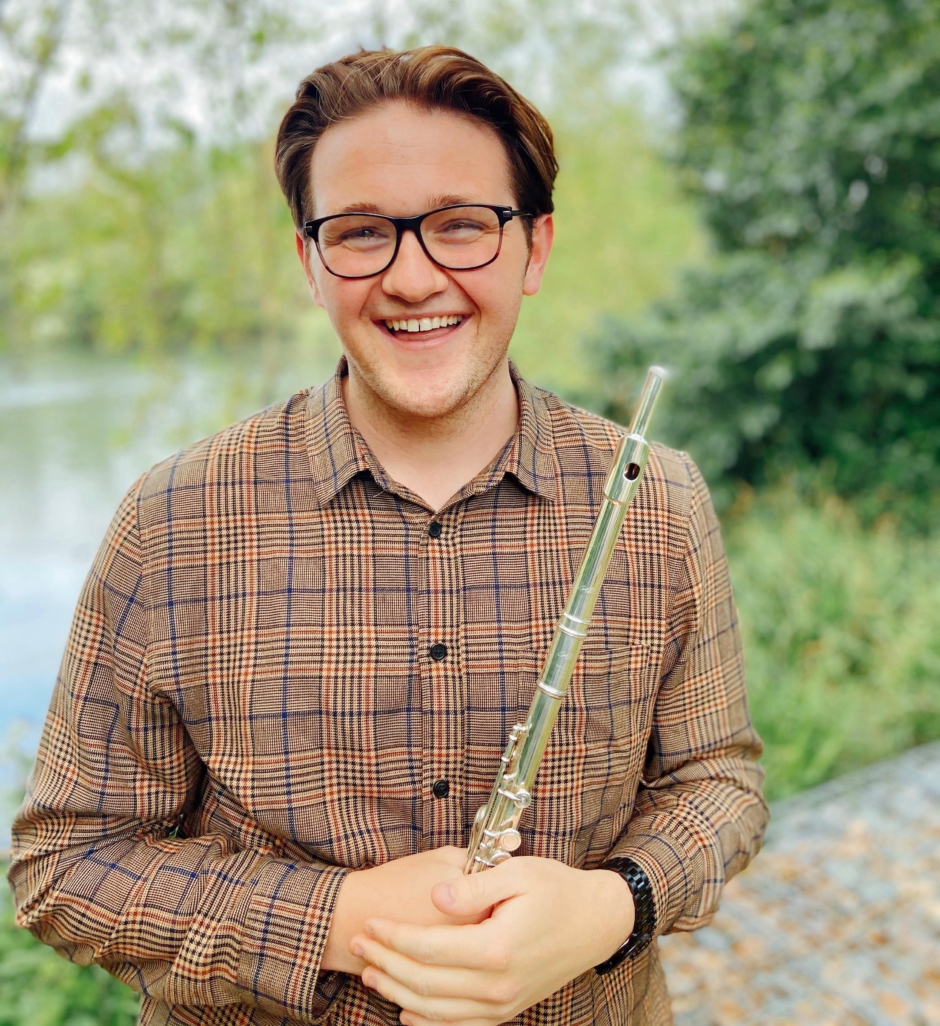 Can you describe three key or memorable moments with your instrument?

Christopher Michie: I think playing in Buckingham Palace was one. Yep, Charlie boy was there. Then, I think it was in August last year, Aimee and I (my flute and harp duo) played at a care home. It was the first time we’d played live since the end of February 2020, and it was with an audience that really needed it. So it kind of showed the fact that music has this overall power that people in care homes especially needed a bit of release and a place to go off to. So that’s the second one.

And then the third one… There’s too many! I think, when I won the Governor’s Woodwind Recital Prize at RCS, I was literally the only undergrad, the rest of them were masters, I thought I was a filler! And then I ended up winning it and all the masters were like, “Wah?!”. And I was like (jokingly), “Watch your backs guys!”

Can you choose three words that describe your instrument in particular?

It’s very … I’m trying to think of the best word to describe it. Characterful, is 100% something you get with it.

Does your instrument have a history or biography you could tell me about?

CM: Not really. I can tell you how I bought it, but I’m not sure where it came from before then!

It’s an Altus 1607, so it’s Japanese made, the full head joint and body. I bought it 3 weeks into my first year of undergrad. I don’t like choosing instruments because it comes with quite a lot of… it’s a very big investment and I don’t want to make the wrong decision. My teacher at the time had unfortunately fallen off her bike and shattered her kneecap, so I had to beg her to come in to RCS. She came in on crutches and I had about six flutes – I’d trialed them and everything was up and going, and I said “Right, sit down, and can I play these flutes and you pick one with me?” and we both chose the same one. So I think it was meant to be.

Can you tell me about your own instrumental performing history in relation to your instrument(s)?

CM: So my performing history with this particular flute, obviously it’s been through the more taxing times with being in full time education where I was only playing the flute; so through all of undergrad, and playing chamber, orchestral, solo rep, and it’s been through many an audition! (laughs) It’s stood up to the test of time, thank god, touch wood. Now I’ve said that, I have to remember I have to record my mock audition next week!

Before that, I had an Altus but a beginner model. So I’ve sort of always had the same make of flute, but it’s just gotten better and better as I’ve gotten older. So I had an entry level closed hole. The first flute I ever had that had open holes was the one I got in the fourth week of undergrad. And it’s such a massive difference because for you to make a noise out of the bloody thing you have to cover the holes. So it was quite a big change for me. But I loved the flute before this one too – it was like an extension of me.

And then before that, I just got the ones my sister gave up on. She played the flute when we were kids, and I remember she pretty much learned it from when she was six, so that would make me 2 or 3, and she left it out on her bed when she went to school. I went in and saw this shiny object – my mum loves to tell this story all the time! – and the fact that the flute was there and I just picked up a little bit of it and it made a noise, and my mum literally thought, “He’s a child prodigy.” I was drawn to it from there, but because we didn’t have a lot of money I was taught on a Coca-Cola bottle. So that was my first flute, to try and get the embouchure right! My sister taught me for free on a Coca-Cola bottle because we didn’t have enough money to get me one too; hers was one of the council’s, when you could get free education from the council. So I was taught on a glass Coca-Cola bottle.

HR: A glass one, so blowing over the top?

CM: Yeah, so you could get the embouchure right.

HR: I tried to get my sister to teach me the clarinet when I was younger and she made me pay her. I was 10 and she charged me £2 for a lesson!

HR: When you’re 10 and don’t get a lot of pocket money, that’s steep! And she was a really bad teacher if I’m honest, she was rubbish. ‘Cos I’d just started learning the bassoon and the embouchure is really different. So she said, “Oh, with the clarinet, you have to bite it.” So naturally I went to just bite it, and she was like, “What are you doing, don’t bite it!” And I just thought, “But you said bite it! How else am I meant to interpret that?” So I was like, no, I’m out.

Do you primarily perceive your instrument as an expansion or challenge to your musical performance? Can you tell me more about this?

CM: I think it comes with a little bit of both, really. I think, that for the flute – obviously I’m biased, but I think it’s the best woodwind instrument, but also the most difficult in terms of the fact that we don’t have anything in our mouth, so we have to create a man-made embouchure, whereas you have something that’s formed and you can blow into. But I also don’t see myself playing anything else. So it is obviously an expansion of my musical being.

I think the flute is so natural to being an extension of my voice. I used to have a teacher up here in Scotland who would make me sing everything, who wanted me to take that idea and literally shove it down the end of the flute in terms of phrasing and emotion. So I think it is an expansion of myself, but it does come with a lot of difficulties. Not in terms of me wanting to give up on it – it actually probably pushes me even further to create more possibilities in terms of emotion and playing.

But when you shove that metal thing on your face, it brings up a lot of bother!

Do any qualities you associate with your instrument aid you or become present during performance?

CM: Hmm that’s tricky actually. I think my flute is to me… I don’t want to call it an alter ego. I give all my instruments names. I give everything names, I give my cars names. It’s as though they’ll work if they have this being, if they have this full on personality of their own. So my flute is called Felicity because she’s classy, and my piccolo’s called Petunia because she’s so teeny-tiny and delicate, but she does pack a punch when she has to get going! But my flute, I think it’s really rare for us, and you’ve heard in class that flutes are seen as the birds and we’re always flying about and everything’s very crisp and like (chef’s kisses) beautiful, but actually sometimes it’s so nice a get proper resonant low register, and I think this flute has it. It can have that switch between really dark and really light. That could be down to me as well, but I think it comes with the personality of the flute and the options are endless with it. It is very powerful and some people are sometimes worried to shift air down the flute, but I know its reactions and my flute reacts best when I actually just use lots of air. So that’s definitely a benefit.

I love that I’m looking at it (the flute) while you’re asking me these questions to see if it has anything to say! (laughs) I keep looking down there and going, “What do you think? Chime up, if you wanna give an answer!”

We use cookies on our website to give you the most relevant experience by remembering your preferences and repeat visits. By clicking “Accept All”, you consent to the use of ALL the cookies. However, you may visit "Cookie Settings" to provide a controlled consent.
Cookie SettingsAccept All
Manage consent